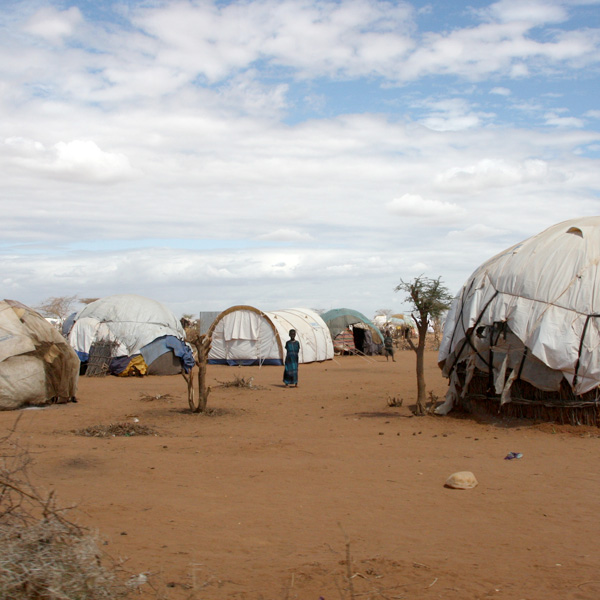 Dadaab, is a town and a region located in Northeast Kenya. There are six refugee camps located within the region of Dadaab. These include Ifo, Dagahaley and Hagadera which are the oldest and the largest of the camps. Dadaab stretches over 50 square kilometres in eastern Kenya. All these three camps are within a radius of 8 km which serves them. Dadaab camp was established in Kenya in 1991, as a response to the influx of Somalis fleeing their homes in midst of civil war. It was originally designed to host 90,000 people. As of today, it holds around half a million refugees according to the UNHCR.

Dadaab is located about 100 kilometres to the North-East of the town of Garissa and 70 km from Somali border, 500 kilometres from Kenya’s capital city, Nairobi, 600 km from the port of Mombasa and is accessible from Nairobi through Garissa by road.

Dadaab occupies a generally flat low lying area with altitude ranging between 700 and 400 meters above sea level; the area is devoid of mountains and hills. The lack of these features facilitates easy movement for both human being and livestock.

Dadaab is semi-arid area with sparse semi desert vegetation, except for some torrential unreliable rains that fall in March/April, October and also December. The area is hot and dry throughout the year. Generally the average rainfall ranges between 300-400 mm per year. The temperature of Dadaab is always hot most of the year and ranges between 21 and 38 degrees centigrade. There is a relatively cooler spell between the months of April and August.

Dadaab Camps are home to many people and communities who fled their home countries seeking mainly security and basic necessities such as food and shelter. The Camp is occupied by people from Somalia, Ethiopia, Rwanda, Sudan, Eritrea, and Uganda, however, most people in the Camp are Somalis. Each camp is divided into sections that are further divided into blocks. A section has a minimum of a block to a maximum of about 30 blocks. Each block is head by a male and a female block leader. The male and female block leaders elect a male and a female section leader who will be in charge of the section. All the section leaders will in turn elect the overall chairman and the chairlady of the camp. These leaders are very essential in the refugee leadership structure since they link the refugee community with the United Nations High Commissioner for Refugees (UNHCR) agencies. They are also involved in the conflict resolution and management at block level. They closely work with UNHCR in ensuring that refugee concerns are addressed.

Due to civil war, merciless killings, explosions, drought and extreme scarcity of food in Somalia, the number of people seeking refugee from Somalia in Dadaab increased to over half a million people. The new population is residing in generally poorer conditions in terms of food, healthcare and education. Livelihoods are severely limited within the camps. The main forms of livelihoods are relief, remittances and some small livestock. Some youth in the camps have received training but have no opportunities for earning a livelihood and have nothing to do while others who have completed “O” level schooling but without further opportunities for higher education pursue some incentive jobs to contribute to the budget of their families. Some refugees have established small-scale businesses to cater for their daily needs.

In addition to this, the Kenyan Government instituted a policy that limits movement of refugees outside the Camps. This means refugees have limited access to labour markets or to alternative sources of income, making them highly dependent on food donation from UNHCR and other aid agencies. 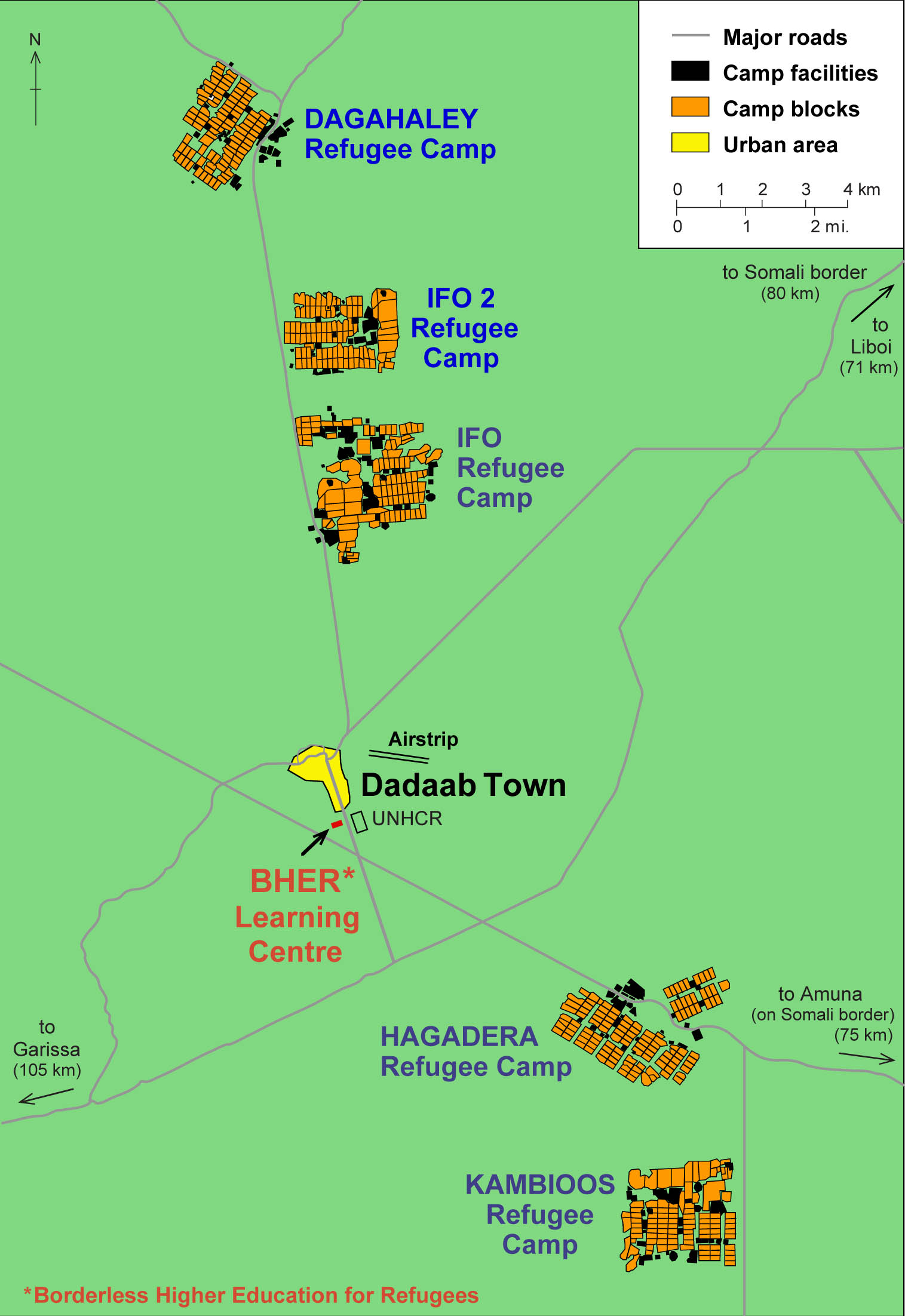 However, animosity between Dadaab refugees and local Kenyans has also developed, particularly over the management of scarce resources. Access to water, land use for business, and firewood is a specific source of collision between the two communities, with the ever-growing refugee population utilising the goods in ways that are not sustainable.

During times of drought, this tension is exacerbated by aid disbursement to refugees that outweighs assistance to local communities. Unequal access to resources has motivated an estimated 40,000 Kenyans to register fraudulently as refugees.

Security has also been a growing concern for Kenya, which has been directly engaged in combating Al-Shabaab in Somalia.  Insecurity has hindered the operation of aid agencies in Dadaab complex. As result of this, the movement of aid agencies within Dadaab Camps is restricted and requires increased security such as escorts by armed vehicles.

Education in Dadaab is facilitated by Windle Trust Kenya (WTK), Lutheran World Federation (LWF), and Care International in Kenya, Kenya Equity in Education project (KEEP), and World University Service of Canada (WUSC).  As of 2014, there are 19 primary schools and 7 secondary schools.. Although secondary education is important, primary schooling is a priority for donor agencies. Although primary school education has been a priority for donor agencies there are still challenges of overcrowded classrooms. When students perform their national examination in primary school (Kenya Certificate of Primary Education (KCPE), about 21% are qualified to proceed to secondary education with regard to the examination performance standard. Those who get this rare chance to pursue high school education in Dadaab are most of them determined to finish their 4-year period. Upon completion of high school, the top students are offered scholarships from Canadian and Kenyan universities while others join the NGO’s operation in Dadaab. Until last year with implementation of the BHER there were no opportunities for higher education.

Need for Higher Education in dadaab

People in Dadaab refugee camps consider education as the only tool to combat and eradicate any kind of obstacle in life. They believe that if higher education is brought to Dadaab it will liberate them from the dark and give them hope. Students in Dadaab have the courage to compete favourably with all students in the hosting nation, Kenya.

Bringing university education to Dadaab will relieve the Dadaab refugee population of the need to travel and get access to quality education from the interior of Kenya.

Dadaab students who study at universities in Kenya’s interior often undergo serious challenges associated with living outside the camp such as interrogation that is often belittling and dehumanizing by Kenya police officers. With higher education in Dadaab these hardships can be averted.

Both primary and secondary schools in Dadaab Camps have a great number of untrained teachers, thus, University education in Dadaab is a useful tool towards offsetting this challenges that, in the long run, could offset the need for trained teachers at most of the 26 primary and secondary schools within Dadaab camps. While Somalia remains the motherland of the overwhelming majority, it is still not a safe place to return to.

Finally, higher education in the camp goes a long way toward preparing students for the future, a future they hope, either within Somalia or in other countries, will constructively contribute to rebuilding their motherland.